"Hayted" - one of the leading engineering companies in the field of autonomous and backup powersupply, energy-efficient technologies and service in the territory of Russia, Ukraine and Kazakhstan.

"Energy Efficiency" - one of the activities of the group associated with the development and introduction of modern technologies for the effective control and management of engineering systems of enterprises, in particular - of autonomous systems and backup power by means of diesel generators (DGs).

The company "Hayted" provides solutions on the basis of diesel generator sets since its establishment - since 1999. Exploiting its own fleet of diesel generators and providing after-sales service, more than 10 years ago there emerged a necessity of addressing the problems of remote monitoring and management of DGs. An important role in this is played by controlling the level of reserve fuel and its consumption.

Task #1. Tracking the performance of all.

Task #2. Remote control and the launch of diesel generators.

➜ RedPine devices are mounted on the objects and provide the necessary data from the monitored systems, standardizing and transmitting them to the higher level system, including the unstable and not always fast channels, such as the cellular network. The customer can choose –either to transfer the data to its own monitoring system or use a cloud platform - Remote Monitoring Centre (RMC) RedPine. You can transfer the data in both directions. A separated cloud RedPine RMC can also be deployed on the client basis. On request, the remote control of the monitored object may be allowed. For example, the remote start is available for diesel generators. 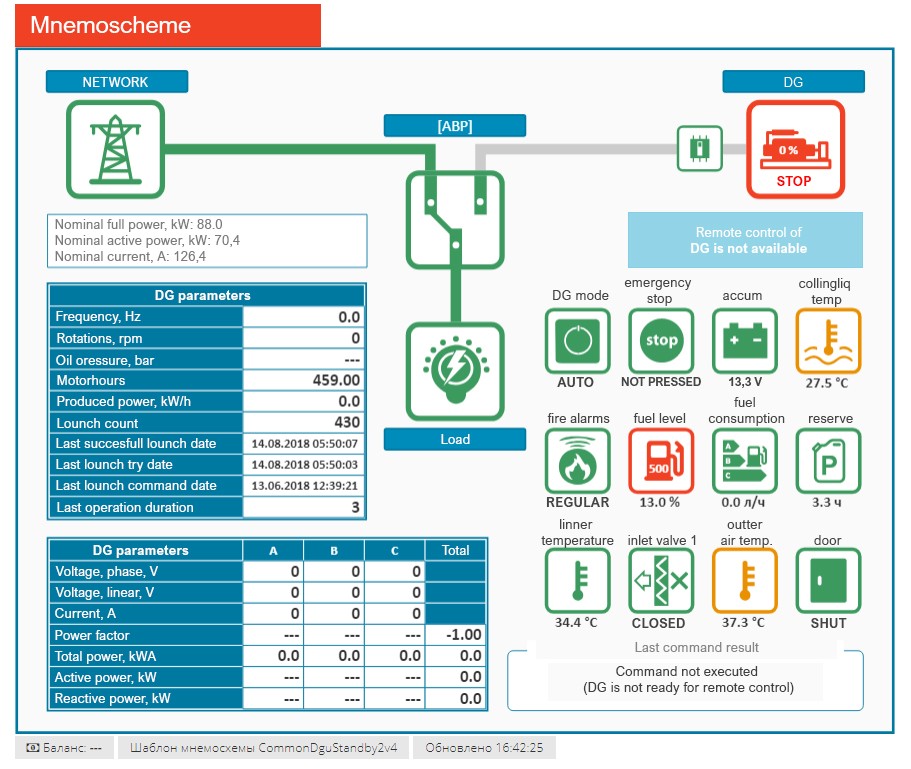 ➜ In the current (already the second) generation of monitoring devices "Energy Efficiency" mainly uses fuel level sensors Escort TD-500. Previously the sensors of other producers were used, which worked on different physical principles. Capacitive sensors turned out to be most convenient and versatile after all. For the installation of capacitive sensors on pipe fittings of DGs tanks, the specialists of "Energy Efficiency" developed a special transition adapter. 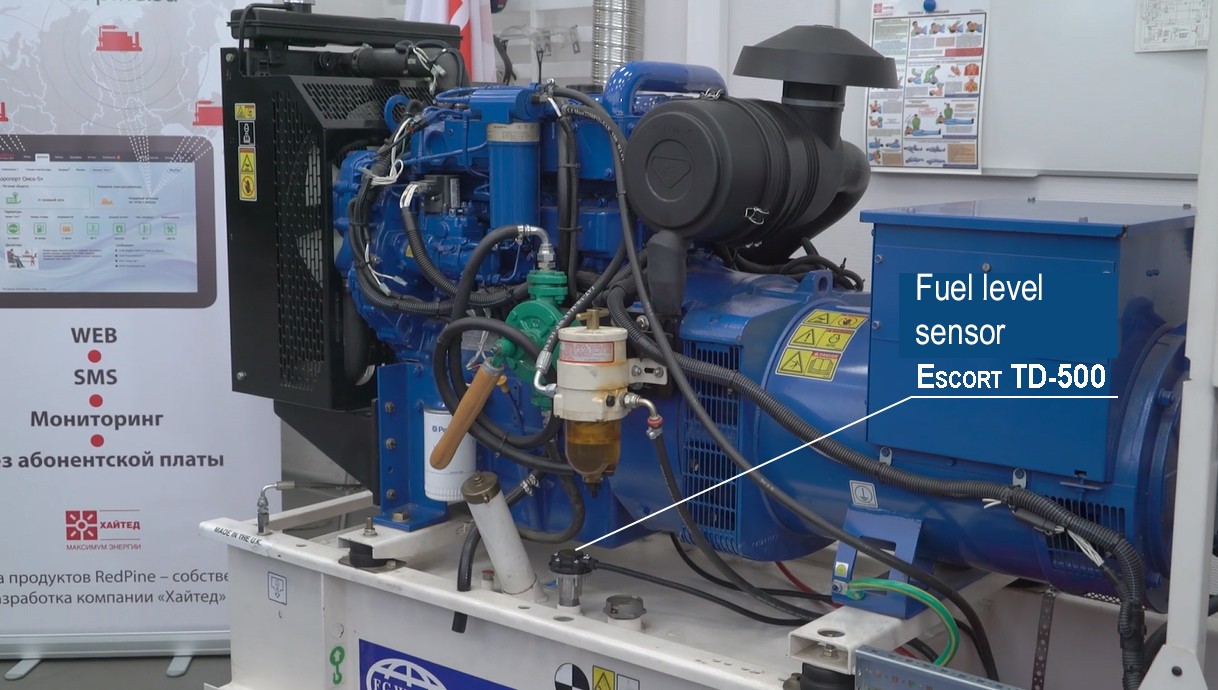 Task #4. Is the diesel generator able to provide power supply during mains failure?

➜ Properly conceived and implemented monitoring system allows the customer to improve the quality and transparency of the operation of engineering equipment without increasing costs significantly. For example, for a diesel generator backup it is important to understand that the unit is ready to provide electricity facility at the network crash. For this RedPine device continuously assesses a number of indicators, and the supply of fuel is one of the key influencing the status of preparedness of a DG for autonomous operation. 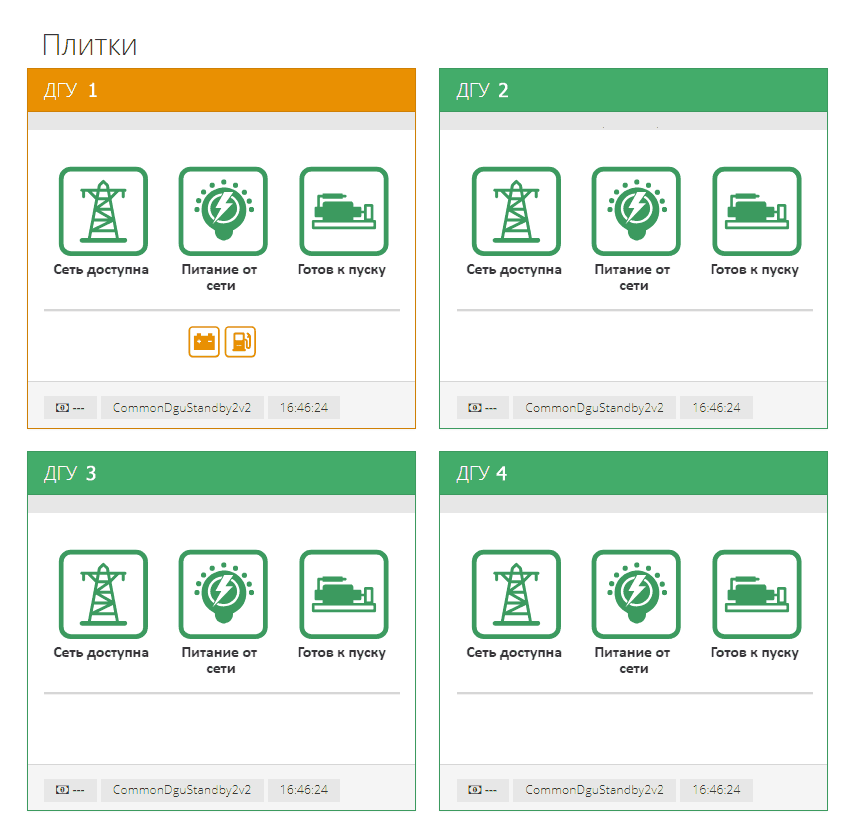 Task # 5. Calculating the operation time of a diesel generator set and power reserve.

➜ Proper monitoring system provides the customer the data in a convenient and understandable form, not burdened with unnecessary or irrelevant information. In terms of control, remote monitoring center RedPine provides useful reports on consumption of diesel generator fuel. These data can be used for further analysis of the condition of the diesel generator and prevent theft. 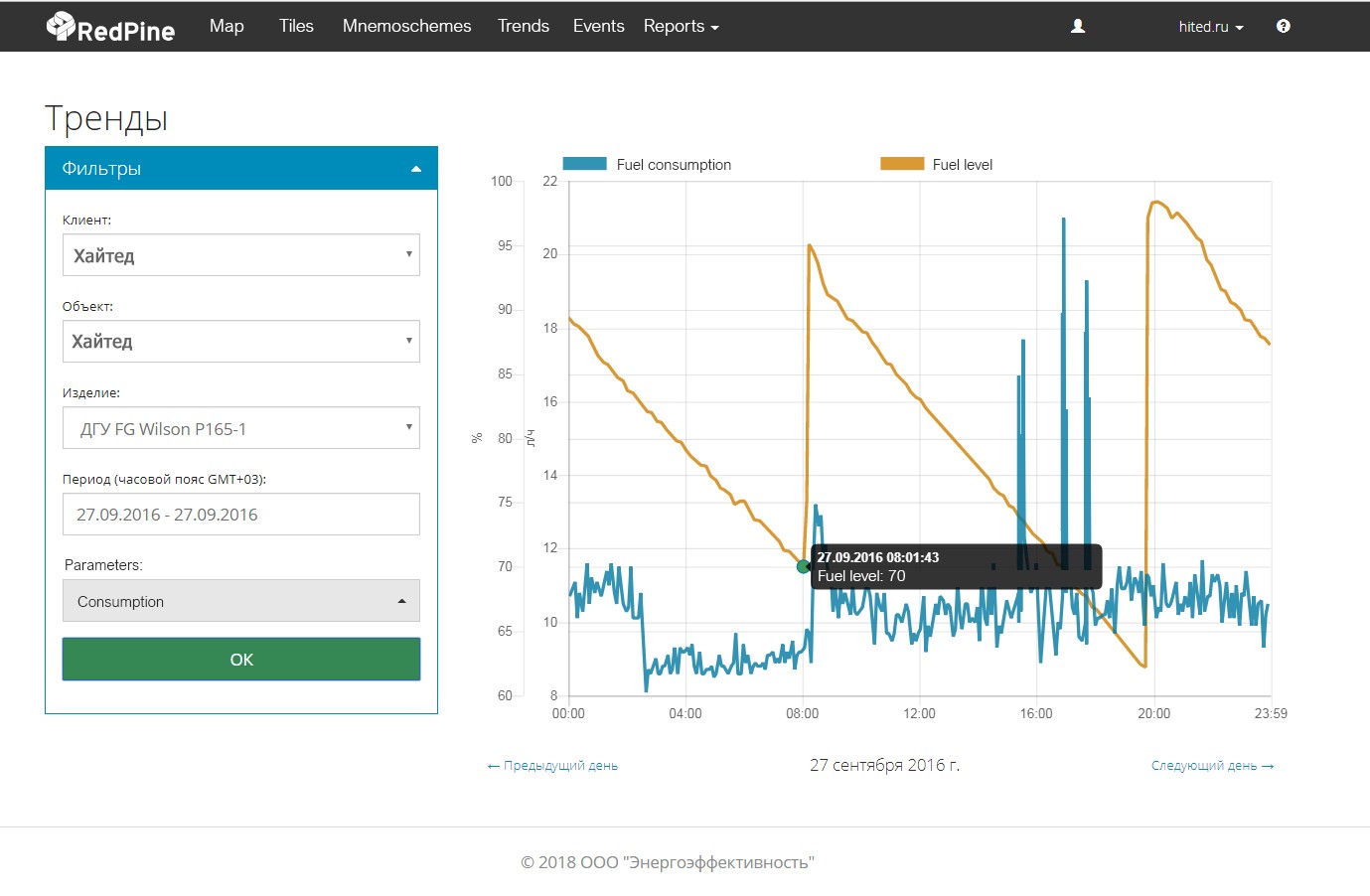 "We chose Escort fuel sensors for convenience and versatility, the ability to adjust the sensor height to the height of the DG tank on site during installation. Another important factor for us is supporting protocol Modbus RTU, allowing you to connect it to one bus with other equipment, such as the DG controller’s panel. Escort provides good quality performance and low defect rate "- Mikhail Saltykov, executive director of the company "Energy" of "Hayted" holding.

➜ Fuel level sensors, after the height adjustment and installation require calibration procedure. To do this, customers need to temporarily connect the sensor to PC via the corresponding interface converter and perform the sensor configuration using special software. Now the company "Energy efficiency" is working on the integration of the Escort sensors protocol in the software of RedPine device to make the configuration process more convenient.

With the beginning of the application of fuel level sensors Escort TD-500 diesel-generator sets served by "Hayted" holding now it’s possible to: